I am delighted to be reviewing Presumed Dead, and even more thrilled that Mason Cross is answering a few questions on today's post! I was lucky enough to get a tiny peak at the very beginning of the book way back, so I couldn't wait to be clutching a finished copy in my sweaty little palms! 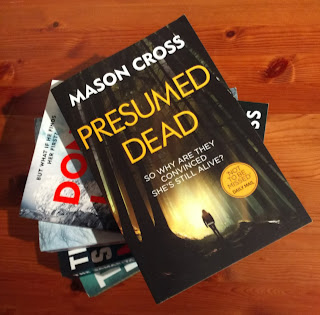 What do you know about the Devil Mountain Killer?

Adeline Connor was the Devil Mountain Killer's final victim. After she was gunned down, the murderer disappeared and the killing spree ended.

Carter Blake has been hired to do what he does best: to find someone. But this time he's hunting a dead girl - Adeline Connor's brother is convinced she's still alive.

But this town doesn't want an outsider digging up old business. And as Blake gets deeper into the case, it starts to become clear that the murders didn't just stop fifteen years ago.

The killer is on the hunt again.

I am a big fan of Mason Cross and his Carter Blake series of books, so I was really looking forward to reading this new one. Happily, I was not disappointed.

This is the fifth Carter Blake book, but don't let that put you off if you haven't read any or all of the previous four. This works brilliantly as a standalone (as do the others).There is the occasional reference to escapades from previous books, but nothing that would spoil your enjoyment of this one. Having said all of that, I would urge you to read the others simply because they are so good! The link to my review of The Killing Season, the first Carter Blake story, is below.

Carter Blake is doing what he does best - looking for someone. Only this time, the person he is looking for is presumed dead. A friend from his past asks him to get involved with the case of a long missing girl, presumed to have been murdered. But her brother is convinced he's seen her alive.

Local law enforcement are initially hostile towards Blake, but come to appreciate his expertise, particularly Deputy Isabella Green, who ends up working closely with Blake.

The Devil Mountain killings happened years ago, and then nothing. Until now. As Blake looks for Adeline Connor, bodies start to mount up, killed in a manner reminiscent of the slayings 15 years before.

I loved that we find out a bit more about Blake's background in this book, but that he still remains a bit of a mystery. I felt there was more of a focus on other characters in this book, particularly Isabella Green, as well as Blake, which gives a nice dynamic. Mason changes between writing in the first person for Blake and the third person for everyone else, which is really effective.

The book is beautifully written, with well fleshed out characters. It has a real cinematic feel to it - I can easily imagine it on the big screen. The pace is just right, with tension mounting as the story progresses. It's a book that keeps you wanting more - I read it very quickly because I couldn't wait to find out what happened next, but then was sad when I finished it cos it was over! But I wasn't disappointed by the ending. OMG, the last couple of chapters! Wow! Absolutely fantastic.

Carter Blake has inevitably been compared to Jack Reacher, the character created by Lee Childs.  For my money, Mason Cross is the better writer - more original, less formulaic. And that's fabulous. Can't wait for more from him! Highly recommended.

I am absolutely delighted that Mason was able to pop by and answer a few questions for us.

So where does the inspiration for Carter Blake come from? Is he who you would be if you weren't a writer?! 😀
- I wanted him to be kind of a mixture of James Bond (capable badass), Jason Bourne (conflicted mystery man) and Bruce Wayne (always prepared). No, he's nothing like me! Although we share the same taste in music, and I am quite envious of his nomadic lifestyle.

Presumed Dead is the fifth Carter Blake book, but the first one with such a focus on other key players as well as Blake. Why the change?
- All of the books so far have had chapters from other characters' points of view, but Presumed Dead is definitely a little different, because it's the first time there's almost a co-protagonist in the form of Deputy Isabella Green. I think the reader definitely gets inside her head more than usual for a supporting character.

You write strong female characters. Was that a conscious decision?
- Thanks! I'm not sure if it's a conscious choice or just that I do my best to make  all of the major characters strong, or at least well-defined. Also, I'm probably influenced by the female characters I've grown up reading / watching, like Dana Scully, Buffy, Ripley, Temperance Brennan, Selina Kyle, Clarice Starling - none of them take any shit.

What's next for you? Carter Blake 6?
- Not yet. The next book is going to be a standalone and, unusually for me, it's set here in the UK. Watch this space!

The first thing you should know about him is that his name isn't actually Mason Cross.

Mason Cross is the author of the Carter Blake thriller series published by Orion. The first book, The Killing Season, was  published in 2014, and was followed by The Samaritan, The Time to Kill (titled Winterlong in the USA), Don’t Look For Me and now  Presumed Dead.

Mason Cross’s short crime stories have been published in magazines including Ellery Queen and First Edition. His story, ‘A Living’, was shortlisted for the Quick Reads ‘Get Britain Reading’ Award.

The Killing Season was longlisted for the 2015 Theakstons Old Peculier Crime Novel of the Year award, and The Samaritan was selected for the Richard and Judy Book Club for Spring 2016.

He lives near Glasgow with his wife and three children.

You can buy Presumed Dead on Amazon UK, Amazon US, and in all good bookshops.

You can read about the launch event for Presumed Dead here.
My  review for the first Carter Blake book, The Killing Season, is here. 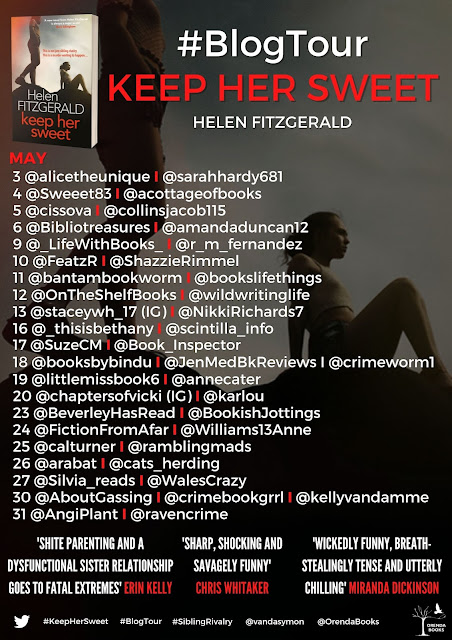