The Darlings by Angela Jackson

A bit of a change for me today as The Darlings by Angela Jackson isn't crime fiction but a family/relationship drama! Yes, occasionally I do read other genres! Thanks to Emma Welton at damppebbles blog tours for inviting me onto the tour and to the publisher for my review copy. 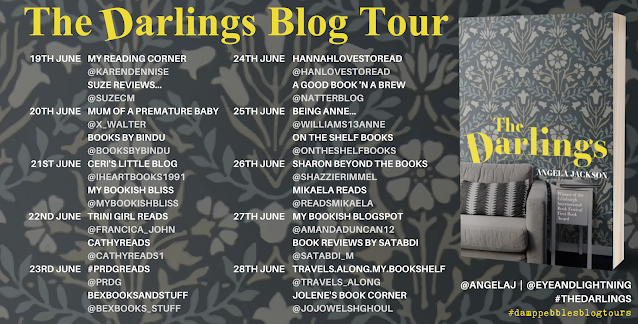 When Mark Darling is fifteen years old, he is the golden boy, captain of the school football team, admired by all who know him. Until he kills his best friend in a freak accident.

He spends the next decade drifting between the therapy couch and dead-end pursuits. Then along comes Sadie. A mender by nature, she tries her best to fix him, and has enough energy to carry them both through the next few years.

One evening, Mark bumps into an old schoolfriend, Ruby. She saw the accident first hand. He is pulled towards her by a force stronger than logic: the universal need to reconcile one’s childhood wounds. This is his chance to, once again, feel the enveloping warmth of unconditional love. But can he leave behind the woman who rescued him from the pit of despair, the wife he loves? His unborn child?

This is a story about how childhood experience can profoundly impact how we behave as adults. It’s a story about betrayal, infidelity and how we often blinker ourselves to see a version of the truth that is more palatable to us.

The Darlings will be published in paperback and digital formats by Eye Books on 21st June 2021. 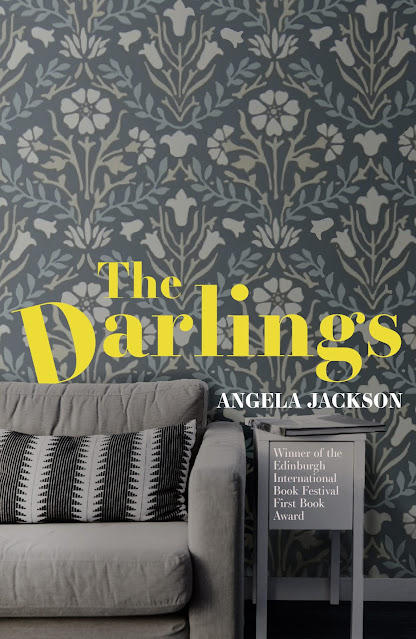 As I aluded to above I mainly read crime and psychological thrillers, which by their nature can often be dark and/or disturbing. So occasionally, I like to tend a wee break and read something a bit different, a bit lighter. A palate  cleanser. And The Darlings was just that.
Focusing on Mark Darling and his wife Sadie, this is a sharply observed story about the pressures a young couple expecting their first baby experience, especially when one of them has a traumatic past. Mark has been haunted since he was fifteen by the death of his best friend which led to years of destructive habits before his marriage to Sadie. Add to that problems getting pregnant and Mark's efforts to forge a new career in comedy, he's a man under pressure. In walks Ruby, an old school friend who was present at the accident that killed Fergus. Mark, I think, feels she can 'fix' him better than Sadie has, and they meet for coffee. And then meet again. And again...
I thought Mark came across as very real. A man who has made some bad choices in life and makes more during the course of this book. But the reader, well, this one anyway, can understand the reasons why he makes them, even if we don't agree with them.  It's clear he loves Sadie, and is looking forward to (if terrified by) the forthcoming birth of their baby. But when we meet Mark he is still plagued by visions of the accident that killed Fergus twenty years earlier - neither Sadie not his counsellor has been successful in getting those to stop, and he's desperate for anything that might help. As well as that, Ruby is an escape from endless lists, planning, baby shopping, DIY, boring domesticity and that is a powerful attraction in itself.
Ruby annoyed me a bit. I found her quite naive, I don't know whether I was supposed to or not but... Whilst she is not in possession of the full facts early on, her expectations were possibly unrealistic. But then again, we can't help who we fall on love with, can we?
There is quite a large cast of supporting players behind our three principals primarily made up of Sadie's family and Mark's mates. A big shout out here for my favourite character, Ava, Sadie's teenage sister. She's smart,  opinionated, direct and just starting to discover the complicated works of love herself. Thought she was brilliant.
I felt this was a pretty realistic look at a man making bad choices because he feels trapped by not only the past, but the present and future too. And the devastation he causes in his wake. It's an easy read, I read it in a couple of days, but I suspect that anyone who has any experience of an affair, from any angle, will be nodding knowingly at parts of the story. Given the subject matter you might expect this to be a heavy read but it isn't at all. Jackson deals with it with a light touch and there are moments where you will smile, laugh or maybe even groan, mainly at Mark's a attempts at comedy.
The Darlings is a story of love, bad choices, infidelity, betrayal and healing. It's populated with well rounded characters and deals deftly and effectively with a potentially difficult subject without ever lessening the seriousness of it. An easy, quick and enjoyable read.
The Author

Angela Jackson is a former psychology lecturer and teacher trainer. Her debut novel The Emergence of Judy Taylor won the Edinburgh International Book Festival’s First Book Award and was Waterstones’ Scottish Book of the Year.

The Darlings is her second novel.

Originally from the north of England, she now lives with her family in Edinburgh.