Having enjoyed two of Erik's other books, I am delighted to be taking part in this tour. Huge thanks to Sarah Hardy at Book on the Bright Side Publicity for inviting me and to the publisher for my review copy. 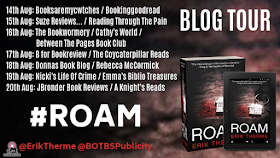 When Kevin finds Sarah stranded by the side of the road, he’s more than willing to give her a ride. Young, beautiful and distraught — she’s everything a single guy could ask for in a girl. What he doesn’t know is that she already has a guy: an abusive, drunken boyfriend who left her there in a fit of rage. And when that boyfriend comes back and finds Sarah missing, a simple ride will turn deadly.

Like Josh Gaylord and Daniel Kraus before him, author Erik Therme explores the angst of disconnected youth in his enthralling and powerful Roam. Therme’s darkly tinged novel is an unforgettable tale of three errant souls brutalized by life’s cruel circumstances, and a remarkable night of discovery and violence that will change them forever. 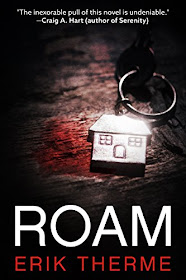 Roam was published by Thecker Books on 21 February 2017. You can purchase it as an eBook from Amazon UK and Amazon US, or as an audio book from Audible UK and Audible US.

I had read, and very much enjoyed, two other books by Erik Therme - Keep Her Close and I Know You. Roam predates both of these, but like them, it's a lesson in characterisation.

Sarah's birthday celebrations have not gone to plan, the car has broken down in the middle of nowhere in the dark and boyfriend Matt is next to useless. After a fight, Sarah heads off to look for help. And Matt lets her. Kevin and his pal see Sarah and offer her a lift home. It's the beginning of a night that neither Sarah or Kevin will forget.

We soon learn that perhaps Matt isn't the ideal boyfriend that Sarah thought he would be, and the more time she spends with Kevin seems to confirm that for Sarah herself. I liked Sarah, but found her a little naive. She's impetuous and makes rash decisions. But I adored Kevin, who is wise beyond his years. A budding writer, he has a skill with words and a simple way of looking at the world.

But both of them, and Scotty who appears later in the story, are damaged souls, scarred by their current circumstances or previous experiences. And it is here that Therme comes into his own. His characterisation and detailing is second to none, and it's impossible not to care about these people. It was for me anyway.

The atmosphere is quite claustrophobic as much of the story takes place in or around Kevin's car, and later in a small hotel room. There was also a mounting sense of dread, as I knew we were heading towards some sort of confrontational conclusion, but was unsure how it would pan out. It went a slightly different way to his I thought it would.

This is part psychological thriller, part coming of age and part love story, full of well drawn, well rounded believable, relatable characters. The pacing is great, with a sense of slight panic for the reader (this one anyway) towards the denouement. And that ending. It was a real 'Woah! Wait, what?' moment for me, and in had to read it twice. It's really clever, but made me feel a little sad.

Erik is running a fantastic giveaway during the tour where you have a chance to win either a digital copy (worldwide) or audio copy (UK and US only) of Roam. Enter below for your chance to win: 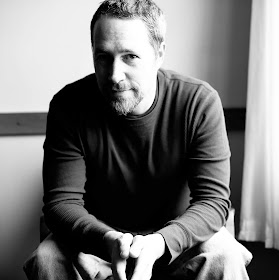 Erik Therme has thrashed in garage bands, inadvertently harbored runaways, and met Darth Vader. When he’s not at his computer, he can be found cheering on his youngest daughter’s volleyball team, or watching horror movies with his oldest. He currently resides in Iowa City, Iowa–one of only twenty-eight places in the world that UNESCO has certified as a City of Literature.