Today I am thrilled to be sharing my full review of An Honourable Thief by Douglas Skelton, published yesterday by Canelo. Some of you may have seen my teaser review ten days ago, and if you search Douglas's name on the blog, you'll find reviews of many of his other books. But back to this one. Huge thanks to Kelly Lacey at Love Books Tours for inviting me on to the blog tour and to the publisher for my review copy. I've since bought my own handsome hardback. 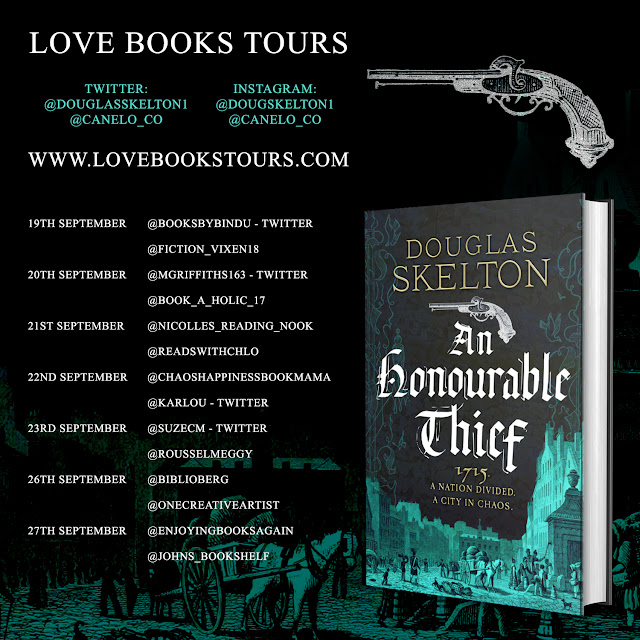 1715. Jonas Flynt, ex-soldier and reluctant member of the Company of Rogues, a shady intelligence group run by ruthless spymaster Nathaniel Charters, is ordered to recover a missing document. Its contents could prove devastating in the wrong hands.

On her deathbed, the late Queen Anne may have promised the nation to her half-brother James, the Old Pretender, rather than the new king, George I. But the will has been lost. It may decide the fate of the nation.

The crown must recover it at all costs.

The trail takes Jonas from the dark and dangerous streets of London to an Edinburgh in chaos. He soon realises there are others on the hunt, and becomes embroiled in a long overdue family reunion, a jail break and a brutal street riot.

When secrets finally come to light, about the crown and about his own past, Jonas will learn that some truths, once discovered, can never be untold…

An atmospheric and utterly compelling blend of crime, history and thriller, to delight fans of SJ Parris, Andrew Taylor and CJ Sansom. 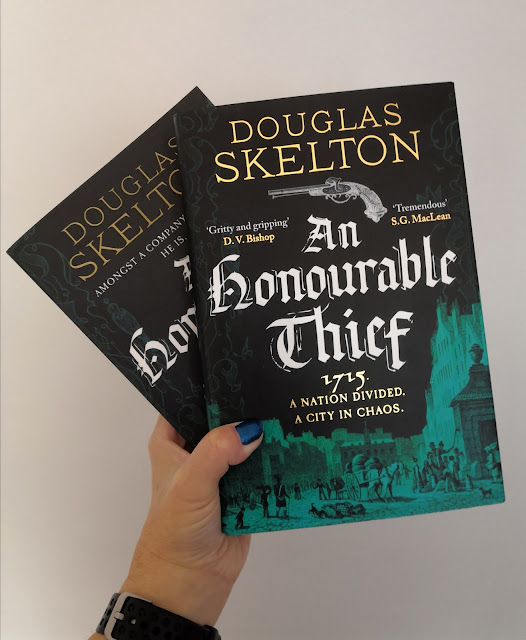 Just after I finished reading An Honourable Thief last month I posted the following on social media: 'Oh. My. Days. You are in for such a treat! This book has a bit of everything - history, crime, adventure, heroes, villains, muskets, swords and even a mysterious sexy woman! Will have more to say. I LOVED IT!!!' Whilst there are muskets in the book, I'd actually meant pistols, but had stayed up very, very late finishing the book and was tired! Anyway, I almost feel that I could just leave that as my review. Tells you all you need to know, right? No? You want more? OK, I'll tell you a wee bit more.

It is 1715. Queen Anne has just died and rumours abound of a secret letter to her half brother, James Stuart, making him the successor to the throne. The Jacobites feel this would be in their favour, a point of view not shared by the government who are desperate to ensure the document, should it exist, doesn't fall into the wrong hands. Particularly in light of the Jacobite rebellion building in Scotland. Jonas Flynt, a reluctant member of Colonel Charters' Company of Rogues, is tasked with retrieving it. He soon discovers he's not the only person searching for the letter, coming into contact more than once with the attractive, mysterious Madame de Fontaine. And the trail takes him back north to Edinburgh and to the family and friends he left years ago. Returning home means he has to face some hard truths... whilst also trying to complete the job at hand.

Firstly, I have to say how much I learned reading this book. Yes, it's a work of fiction, but it's rooted in real history, real events are unfolding which frame the story, and Skelton knows his stuff. My history knowledge generally is very weak and these were events I knew shamefully little about. Well, now I know more. Partly from what 's in the book and partly because it sparked my interest to look into it a wee bit further. It's peppered throughout with historical words and phrases, and some are brilliantly descriptive.

Jonas Flynt is an interesting, intriguing character. Not afraid to steal or cheat, he also has a strong sense of what is right. Whilst extremely adept at fighting, it's not something He enjoys, it's not done for pleasure. He feels things deeply. And he's a tortured soul, something that Skelton explores to great effect over the course of the novel. Whilst generally controlled with his emotions, we sometimes see a glimpse of them escaping, but only in front of the right people. I found his homecoming to Edinburgh heartwarming and sad, in equal measure. He can be very humorous and has the best names for his pistols! But, whilst he is undoubtedly the central character in this story, he is supported by a large, colourful supporting company with each character beautifully described. Standouts for me were Cassie and Rab.

The scene setting is incredible. The streets in both London and Edinburgh are so vividly described. And the smells... oh my goodness! I don't have a sense of smell but even I could detect the aroma! We are totally transported back to the 18th century - the outfits, the ale houses, style of dress, the way people carry themselves, speech, attitudes to and expectations of women, attitudes to people of colour,, everything. It's marvellous and immersive. The backdrop to the story is the Jacobite rising following the unification of England and Scotland so politics gets a fair airing here. And, it would seem, that we haven't moved on much since 1715 - I certainly recognised a lot of the feelings and anger expressed, I see it around me every day. And politicians and governments haven't got any better since then either.

It's beautifully written, Skelton has a way with words. He talks of nights of 'sup and sin' and mists that swirl like 'sinuous creatures'. I want to visit The Black Bear 'prone to rowdiness, drunkenness and licentiousness' - sounds just my mind of place! And there are a few fantastic, colourful insults, My favourite coming from a brothel madam - I'll leave you the joy of discovering it.

The storyline itself has everything you could ask for - part crime story, part spy thriller and part epic adventure. There's politics and plenty of fighting, secrets, lies and betrayal. A public hanging and a visit to the battlefield at Sheriffmuir. And a man coming home, facing family and friends for the first time in years. It's not an easy homecoming and there were moments my heart ached for Jonas and one that brought tears to my eyes.

I don't know if this review even makes sense, I just wanted to share some of my love for the book. I haven't read all of Douglas's books but I think this is the eighth I have read and I'm pretty sure this is my favourite so far. Different from his other stuff, this has it all. Will easily be one of my favourite books of this year. 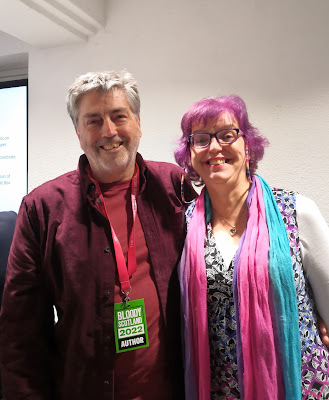 His first thriller Blood City was published in 2013. The gritty thriller was the first in a quartet set on the tough streets of Glasgow from 1980 onwards. It was followed by Crow Bait, Devil's Knock and finally Open Wounds, which was longlisted for the first McIlvanney Prize for Scottish Crime Book of the Year in 2016.

His two Dominic Queste thrillers, The Dead Don't Boogie and Tag - You're Dead lightened the tone but didn't skimp on thrills.

He followed these with his New York-set chase thriller The Janus Run in 2018.

Thunder Bay, a dark and atmospheric tale of secrets, lies and murder on a Scottish island, was published to great acclaim by Polygon in 2019. It was longlisted for the McIlvanney Prize for 2019. This was followed by The Blood is Still in 2020 and A Rattle of Bones in 2021, which was longlisted for the McIlvanney Prize for 2022. The fourth in the series, Where Demons Hide, was released earlier this year.
An Honourable Thief is his 12th novel and the first in the Company of Rogues series featuring Jonas Flynt.
Douglas is often recruited by documentary makers to contribute to true crime shows on TV and radio and is a regular on the crime writing festival circuit.

He takes part in comedy shows with other crime writers. To date he has written three Carry on Sleuthing plays in which he also appears along with Caro Ramsay, Michael J. Malone, Theresa Talbot, Pat Young and Lucy Cameron, with occasional guests Alex Gray, Lin Anderson and Neil Broadfoot.

He is also one quarter of Four Blokes in search of a Plot, along with Gordon Brown, Mark Leggatt and Neil Broadfoot. This is a fun show in which they invited the audience to give them a murder weapon and a protagonist. They then take it in turns to create a crime story (usually developing into something wild and wacky) while also answering audience queries about the craft.

His one man event, You the Jury, invites audiences to deliver verdicts on real life but heavily disguised cases from around the world. In 2019 the format was extended into a court drama, thanks to the Faculty of Advocates in Scotland, within Stirling Sheriff Court played to three sell-out houses during the Bloody Scotland festival.

He is, with bestselling author Denzil Meyrick, a regular on the SBOOKS podcast.
at September 23, 2022
Share