The Janus Run by Douglas Skelton

I'm always delighted to read new work by Scottish writers, but when it's by one of my favourite authors, who has done something completely different in his new book, then it's off the scale exciting! 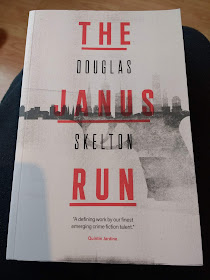 When Coleman Lang finds his girlfriend Gina dead in his New York City apartment, he thinks nothing could be worse... until he becomes the prime suspect.

Desperate to uncover the truth and clear his name, Coleman hits the streets. But there's a deranged Italian hitman, an intuitive cop, two US Marshals, and his ex-wife all on his tail. And trying to piece together Gina's murky past without dredging up his own seems impossible. Worse, the closer he gets to Gina's killer, the harder it is to evade the clutches of the mysterious organisation known only as Janus – from which he'd long since believed himself free.

Packed with plot twists, suspense and an explosive climax, The Janus Run is an edge-of-the-seat, breathtaking thriller – NYC noir at its finest.

The Janus Run was published by Contraband on 20th September 2018. 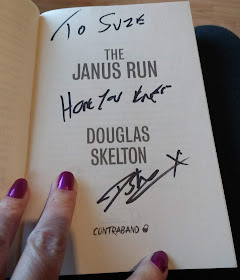 If you're not aware of Douglas Skelton, where have you been? As well as writing the huge collection of books mentioned below, he's also authored one non crime non fiction book, written articles in magazines and newspapers, appeared in TV documentaries, is one quarter of the very funny Four Blokes in Search of a Plot (find them on Facebook), and the mastermind behind (and often in front of) the hysterical Carry On Sleuthing series of comedy crime plays (details also on Facebook).

But with this latest work, The Janus Run, he has gone in a completely new direction, hopping over the water to the United States. The result is an action packed, fast paced thriller that doesn't let up for a minute.

The prologue gives us a taste for what's to come, before we join Coleman Lang as he wakes up to find his girlfriend dead in the bed next to him. He is immediately the prime suspect in her death, and sets out to both prove his innocence, and find Gina's true killers. He is forced to to take an unexpected partner in this quest, and progress is hampered by the fact they are being pursued by a collection of colourful characters.

I loved this story, from the beginning to the hugely satisfying climax. I tasted Lang's grief, although for me it was more acute for Austin Lomax (who we discover is a man full of secrets). 'And so he sat there, alone in a pizzeria, a cup of coffee going cold at his hand, staring at a picture on a tablet while Billy Joel sang about an Uptown Girl on the MP3 player.' Such a sad sentence.

Gina is a real presence throughout the story, but there are other strong women featured, which was great to see. I loved Rosie Santoro - a determined, no nonsense woman who isn't afraid to go after what she thinks is right. But I can't forget the guys. Our hero, Coleman Lang, is not only gorgeous but certainly a man of mystery, but we see the layers start to peel away. My other favourite male character, for very different reasons, was Nicky Bruno. His singing made me think of the moments in the horror film, when the child's voice start singing the nursery rhyme... Read the book and you'll get what I mean!

But it's almost unfair to highlight individual characters because the whole cast is so rich, and so beautifully written. As is the whole story. It was easy to forget that this wasn't written by an American author. For me, at least, it was completely authentic. But there are hints of Skelton's dark humour throughout. I loved his description of a grey sky 'as dull as a Brit TV show on PBS.'

The action begins on the first page and doesn't let up until the last. Bullets fly everywhere, there's blood and guts all over the place and the blistering tension is ramped right up until the thrilling  climax.

This change of direction has been a success - this book is a triumph. I can't recommend it highly enough. I don't know if we'll hear more about Coleman Lang, but there was certainly that option. Whatever, I'm excited to see what Douglas comes up with next, whichever side of the pond it's on!

You can buy The Janus Run from Waterstones and Amazon. 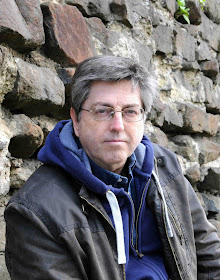 Douglas Skelton, shortlisted for Scottish Crime Book of the Year 2016, is a writer who specialises in the darker side of things: he's a former journalist who has published eleven true crime books. In 2011 he made the leap to writing crime fiction, beginning with the hugely successful series of Davie McCall thrillers and continuing with the Dominic Queste series: The Dead Don't Boogie and Tag - You're Dead.

You can find out more by visiting his website, or by finding him on social media.